A Warm Scottish Welcome to Our Very First

We hope you’ve had a fantastic Christmas break and are looking forward to everything 2019 has to offer.

Our January blog focuses mainly on our world-renowned bard, Robert Burns, and with this in mind, who better to keep us entertained than another Ayrshire-born Scottish poet!

We are excited and honoured to welcome Lorna Wallace, a young writer from Kilmarnock as our Scottish Keepsakes guest blogger.

Read Lorna’s own interesting and enthusiastic journey with Burns’ works?and how it has helped shape her own writing styles.

A Wee Bit About Us

Here at Scottish Keepsakes, we also feel immensely proud of our Ayrshire link to Burns – particularly that of Kilmarnock where we are based – and we like to think the Bard would enjoy a browse through our website (perhaps to buy a gift to give to one of his many ‘Bonnie Lassies’!)

The flora and fauna of the Scottish countryside is passionately reflected in Burns’ writings, as he was very fond of nature. Our own wee nod to this is in our range of Scottish heather and thistle keepsakes. 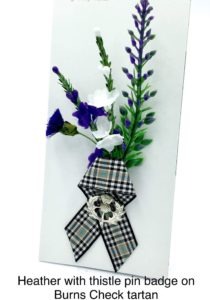 Popular as bespoke table gifts at Burns Suppers and other events, the beautiful Burns Check Tartan ribbon is one of our most requested tartans, used together with Scottish lapel pin designs, foliage and our unique Lucky Silver Sixpences gifts. We use a Burns’ manuscript design as a background for any message or quote you would like printed on! 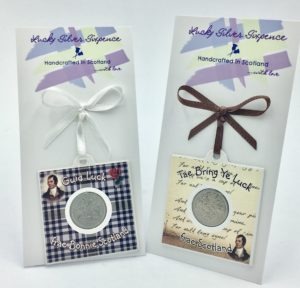 The Burns Check tartan came about almost 50 years ago when the late Baron Marchand was approached by a friend from ‘The Scotsman’ newspaper with the suggestion that a tartan should be created in Robert Burns’ honour. As detailed on the website for The Scottish Register of Tartans, the final design was modelled on The Shepherd’s Check – perhaps acknowledging Burns’ farming background and love of nature. 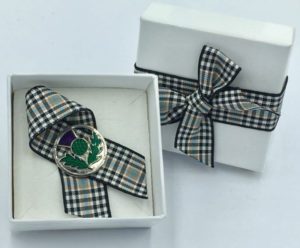 A Wee Bit About Burns (by Lorna Wallace)

Like many people, I learned about Burns at school and went on to develop a keen interest in his use of language, rhythm and other poetic techniques. In my third year of university, I wrote my first ever Burns-inspired poem, “Tae A Selfie“, which went viral across social media. Since then I’ve loved writing in the Scots dialect and am always thrilled to learn more about Burns’ work and life.

You can read Tae a Selfie (a Broad Scots poem inspired by the works of Robert Burns) here.

Who is Robert Burns?

Robert Burns (also known as Rabbie Burns, the Bard of Ayrshire, the Ploughman Poet and many more) was born on 25th January, 1759, in the village of Alloway, South Ayrshire. He was the eldest son of farmers William Burnes and Agnes Broun and came into the world on a wild and stormy night in the ‘auld cley biggin’ (the Burns’ family’s cottage).

Burns was a voracious reader and soon developed an interest in writing his own work. Long hours spent working on the family farm meant Burns had a very close relationship with nature, which would inspire him greatly as he grew up. He also drew inspiration from politics, religion, the social class system and many other ‘hot topics’ of his time.

Back in 1786, the first ever volume of Burn’s works ‘Poems, Chiefly in the Scottish Dialect’ was published in Kilmarnock (and the publishing house is now a popular pub called ‘First Edition’!) 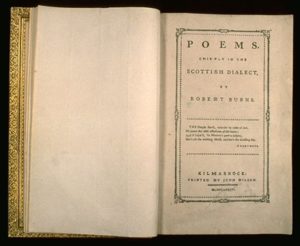 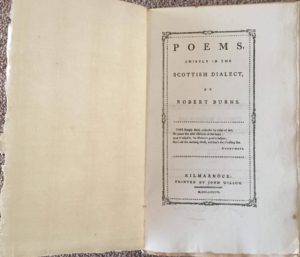 Robert Burns’ birth is celebrated worldwide every year, usually with a night of poetry?recitation, song, traditional Scottish music and, you’ve guessed it, the great Burns Supper of haggis, neeps (turnips) and tatties (potatoes)! A wee dram of Scotch whisky is often involved as well!

However, the celebrations go far beyond a one-night event in Scotland, with people all over the world hosting Burns Suppers, Scots poetry competitions, music festivals and dramatic performances at all times of the year. There are even Burns appreciation societies in New Zealand and Bangkok!

The city of Dunedin, New Zealand, has a statue of him in the centre and one of the city’s founding fathers was Burns’ nephew, Reverend Thomas Burns. Other groups hosting Burns celebrations include The Japan Scotland Association, the Bangkok St. Andrew’s Society, Chicago Scots, The Burns Swiss Chamber of Commerce, the Burns Club of London and the Dubai Caledonian Society – the list goes on and on!

Ellisland Farm in Dumfries was the home of Robert Burns from 1788-1791, built by Burns’ own hands for his wife, Jean Armour. The six apartment house (described as a “modest mansion” by visitors in 1789) was situated on the banks of the River Nith – an idyllic setting that inspired some of his most well known poems.

‘Auld Lang Syne‘, sung all over the world on New Year’s Eve, was penned in this very house, as were ‘Ae Fond Kiss‘, ‘Ye Jacobites By Name‘ and ‘Tam O’Shanter‘.

Find out more about them via the Ellisland Farm website.

Burns loved animals – a relationship that is poignantly explored in his poem, ‘Tae A Mouse’. It is therefore important to mention Burns’ most loyal companion and poetic inspiration: his Border Collie, Luath!

Burns and Luath were inseparable friends, with Luath often sitting curled at his feet as he wrote. Burns even featured his dog in one of his most famous works, ‘The Twa Dugs‘. Luath even played a part in Burns meeting his future wife, Jean Armour, when the errant pooch tried to steal the laundry she was hanging up and gave Burns an opportunity to talk to her!

At the top of Kilmarnock ?s King Street, there are also sculptures of two dogs, commemorating Burns’ poem, ‘The Twa Dugs‘.?The town’s shopping centre, The Burns Mall stands just a few yards away. 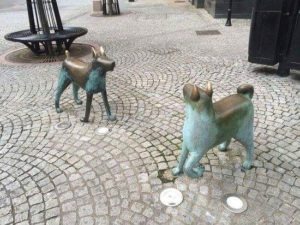 You can find out more about Luath here.

Speaking of The Twa Dugs, here at Scottish Keepsakes we have our very own little twosome!

Bonnie and Isla are proud to be our brand ambassadors and are a wonderful source of inspiration for our Westie designs! Watch this space – their new range of cute products is coming soon!

Get in Touch With Scottish Keepsakes

We hope you’ve enjoyed our very first Blog ‘n’ Blether and will join us next month for our February installment!

Why not get in touch and let us know what you’d like us to blether about next! 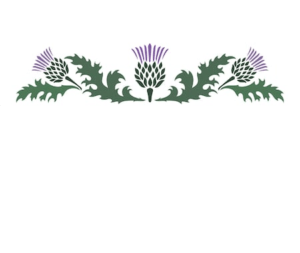 ** INTERNATIONAL CUSTOMERS ** Please note: Orders shipped to the EU (and some other overseas destinations) may attract customs charges which are out-with our control and are the customer’s responsibility to pay. Please check the customs regulations for your country for more information. Thank you 🏴󠁧󠁢󠁳󠁣󠁴󠁿 Dismiss

You can find out more about which cookies we are using or switch them off in settings.

This website uses cookies so that we can provide you with the best user experience possible. Cookie information is stored in your browser and performs functions such as recognising you when you return to our website and helping our team to understand which sections of the website you find most interesting and useful.

Strictly Necessary Cookie should be enabled at all times so that we can save your preferences for cookie settings.

If you disable this cookie, we will not be able to save your preferences. This means that every time you visit this website you will need to enable or disable cookies again.

This website uses Google Analytics to collect anonymous information such as the number of visitors to the site, and the most popular pages.

Please enable Strictly Necessary Cookies first so that we can save your preferences!